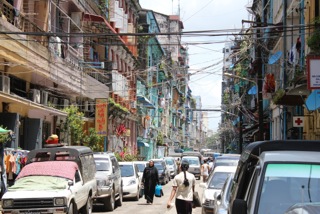 I strolled around downtown Yangon this morning. It was hot and humid but I didn’t mind, I like the heat and humidity of Southeast Asia.

People were smiling and returned my greetings just as they always have. The streets were full of tea houses and vendors selling fruits, vegetables, newspapers.

I walked into a book shop and could not believe my eyes: on display was the current issue of The Irrawaddy, a monthly political magazine published by Burmese journalists in exile. It is very respected, but highly critical of the military regime, and had been banned in Burma since its foundation in 1993. Not long ago, just being caught with a copy of it could have gotten you sent to jail. Now it was on sale in the heart of Yangon. I bought a copy and checked to see if they even had an office in the city. They did, just two streets away.

I found the address, walked up a few stairs, and knocked on a door with a sign Irrawaddy. Nobody answered. I opened the door cautiously. Six young people were working in a cramped office, too busy to pay much attention. At least they had AC…

Luck was on my side. The editor of the English edition, Kyaw Zwa Moe, was in the office and he was kind enough to spend some time with me. Over the next few days, we met a couple of times and he told me his amazing story. He is a mild-mannered, soft-spoken man in his forties, who looks at least ten years younger.

Kyaw Zwa spent eight years in jail as a young student. His crime: he had dared to criticize the government. Life in prison was hell, he told me. Five inmates in a cell eight by eight feet in size. No toilet. Not much food. Visitors were only allowed every two weeks for fifteen minutes. His most frequent visitor was his mother—until the day she was killed in a car accident.

“Many inmates went crazy eventually,” he said in his soft voice. “They were so full of anger and hatred, they could not take it anymore.”

But not him. He never lost hope. “‘I will be released one day,’ I told myself over and over again. It became my mantra.” There is not even a trace of anger in his voice when he talks about those stolen eight years. “I don’t regret the time in jail,” he said. “I learned so much about life, about people, about myself. It was a university of life.”

After his release, he fled to Thailand. He was then able to study journalism for a year at Berkeley, and went back to Thailand to work for The Irrawaddy. A few months ago he got a visa to live and work in Yangon as a journalist. He is still wary about how long the new freedom will last. “The struggle for democracy has just begun,” he said, happy to be part of it.

Until recently the magazine was funded by donations from international donors, but now, it has to become financially independent. Not an easy task.

If you are interested in Burma and want to know more about the country, I can only encourage you to check out their great website: www.irrawaddy.org